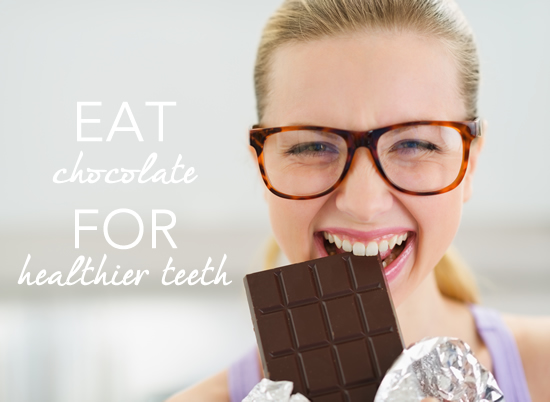 Chocolate is effective in fighting cavities, plaque, and tooth decay in the mouth. In fact, cocoa compounds in chocolate may be more effective at fighting decay than fluoride. While candy isn’t known for keeping teeth healthy. dark chocolate with at least 70% cocoa can help fight off decay.
Tooth decay occurs when bacteria in the mouth turns sugar into acids. Which eat away at the tooth’s surface and cause cavities. Compounds in the cocoa bean husk have an anti-bacterial effect. Also, it fights plaque. One compound is CBH which is a white crystalline powder. Its chemical makeup is like caffeine. And helps harden tooth enamel, making your teeth less susceptible to tooth decay. This makes chocolate less harmful than many other sweet foods. Dentists might warn against it because of their antibacterial agents. These may offset its high sugar levels.

So really cocoa bean is what does the cavity fighting. The closer the confection is to the bean, the better. Cocoa beans contain tannins, polyphenols, and flavonoids. Each of which is a type of strong antioxidant that benefits your mouth and teeth in the following ways;
Antioxidants are a group of molecules that keep your body healthy on a cellular level. Dark chocolate can contain up to four times the level found in green tea. High amounts of antioxidants in saliva have shown to fight periodontal disease.
Tannins are plant compounds. They are what give dark chocolate its bitter taste and dark color. They also help stop bacteria from sticking to teeth. These are molecules that bind to bacteria before plaque has time to form.
Polyphenols are a class of naturally occurring chemicals that can limit oral bacteria. They are also able to neutralize the microorganisms that cause bad breath. Also, prevent bacteria from turning sugar and starches into acid. Polyphenols also have anticancer and anti-inflammatory effects. And reduces hypertension and stroke.
Flavonoid compound called epicatechin is a group of plant-based antioxidant. It slows tooth decay and can reduce the risk of cholesterol, blood clots, and clogged arteries.
Chocolate may have all these health benefits yet any food should be consumed in moderation. For the best therapeutic effect, it’s best to chew on cacao nibs. Most will find this option unpalatable.
The second best choice is organic dark chocolate with less than 6-8 grams of sugar per serving. Chocolate is a calorie-rich food, so change your calorie intake accordingly. Raw chocolate is even a better choice, as it’s less processed, and more of the antioxidants are left intact.

Teeth-friendly dark chocolate should be available at your local grocery store. Keep in eye out for bars that have their cocoa percentage on the label.
Hershey’s Extra Dark Chocolate contains 60 percent cocoa.
Ghirardelli’s Twilight Delight contains 72 percent cocoa.
Ghirardelli’s Midnight Reverie contains 86 percent cocoa.
Lindt’s Cocoa Supreme Dark contains 90 percent cocoa.
Dark chocolate contains less sugar than other varieties, so it’s better for your waistline. For more information on sweets and their effects on your teeth contact us today. And schedule an appointment with our skilled dentists. They are committed to giving you the healthiest most beautiful smile. and advise you on maintaining it too.
Prev Post