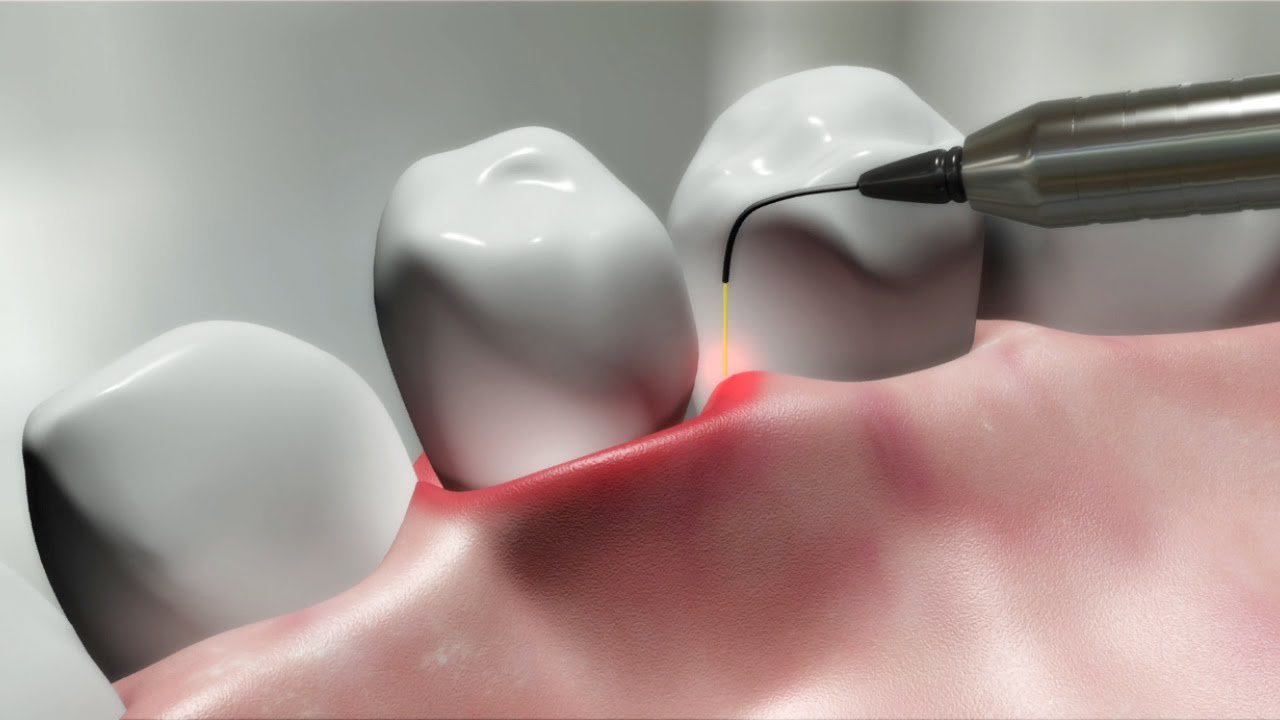 Lasers have been in use since 1994 in dentistry, to treat many dental problems. Laser dentistry treats:
Decay. Lasers are meant to remove decay from teeth and prepare surrounding enamel for fillings.
Gum disease. Lasers can reshape gums and remove bacteria during root canal procedures.
Biopsy or lesion removal. Lasers can remove small pieces of tissue for cancer testing.
Pain. Lasers are also used to remove lesions in the mouth and relieve the pain of canker sores.
Teeth whitening. Lasers speed up in-office teeth whitening procedures. A peroxide bleaching solution, applied to the tooth surface, activates by laser energy. which speeds up of the whitening process.
All lasers work by delivering energy in the form of light. In surgical and dental procedures, lasers can cut or vaporize tissue. When used for curing a filling, the laser helps to strengthen the bond between the filling and the tooth. In teeth-whitening procedures, the laser acts as a heat source. This enhances the effect of tooth-bleaching agents.

Lasers in dentistry compared to the dental drill may cause less pain in some instances. This reduces the need for anesthesia. Also, it reduces anxiety in patients uncomfortable with the use of the dental drills. Furthermore, lasers minimize bleeding and swelling during soft tissue treatments. Furthermore, it helps preserve more healthy tooth during cavity removal

A disadvantage of lasers is that it can’t come in contact with already placed fillings. Because it can melt them.
Lasers also arent in many commonly performed dental procedures. For example, lasers can’t be used to fill cavities located between teeth, around old fillings, and large cavities that need to be prepared for a crown. Also, lasers cannot be used to remove defective crowns or silver fillings or prepare teeth for bridges.
Traditional drills may still be needed to shape the filling, adjust the bite, and polish the filling even when a laser is used.
Lasers do not eliminate the need for anesthesia. Yet, there is research that has found lasers to have an analgesic, or calming, effect, on nerves. Research is ongoing in this area to determine if lasers can actually prevent pain during surgery. Seems like the anti-inflammatory action on the nerve cell membrane could work like a local anesthetic.

Laser treatments tend to be more expensive than treatment that utilizes the traditional tools such as drills. This is due to the cost of a laser which is much higher than a dental drill. Lasers can cost between $39,000 and $45,000, compared to about $600 for a standard drill.
Finally, patients should be aware that lasers cant totally replace other dental tools. For example for removal of old amalgam filling material and preparation of large fillings or crowns. Also, the completion of root canals can not be done with a laser. There are limitations to the diagnostic capabilities of the Diagnodent laser. Yet, the use of lasers in dental practices has provided patients with state of the art dental care. Which consequently has made coming to the dentist a lot more pleasant.
For more information about lasers and technologies used in our many procedures contact us today. And make an appointment be sure you will receive treatment by highly qualified dentists. Who are always willing to clear up any doubts or concerns.
Prev Post